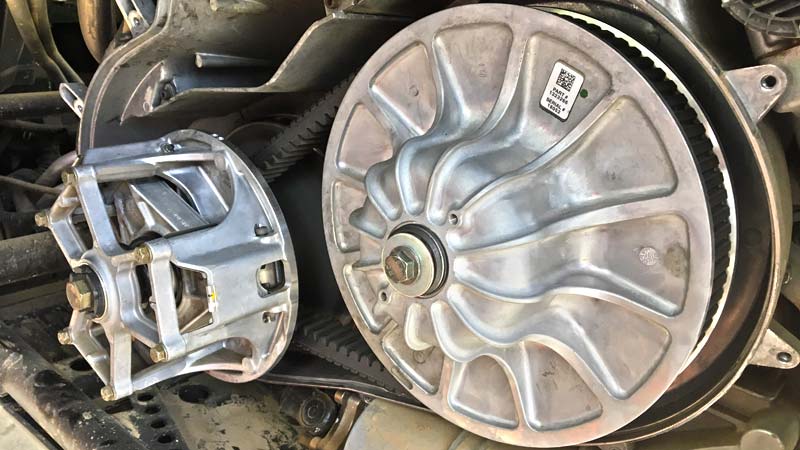 In the quest to find out why my dad’s 2016 Polaris RZR XP Turbo keeps destroying belts in the sand dunes we decided to install a Razorback belt temperature gauge. This will allow us to monitor the belt temperature so we can get an idea of what is causing the belt breaking heat.

This installation guide will specifically cover installation on a 2016 Polaris RZR XP4 Turbo but the general process is the same for any UTV or Side-by-Side:

Razorback makes the belt temp sensor with different cable lengths for other UTV models as well as snowmobiles and ATVs.

Why you need to monitor CVT belt temperature

If the belt driving your UTV’s CVT transmission builds up too much heat it will fail. By monitoring the temperature in real time you can back off the throttle before damage occurs.

Heat is the number one enemy of a CVT belt and too much of it will quickly destroy the belt. If you can determine what riding conditions are causing excessive heat, riding style can be adjusted to reduce that heat. If riding style isn’t the cause (meaning you aren’t hammering the throttle constantly and riding wide open for extended periods of time) you might have a problem with your clutches. Keeping an eye on the belt’s temperature will help determine what that problem is.

Replacing a belt while you’re out riding is never fun. This is because it usually happens at inconvenient times. The last time a broke a belt was in in the dunes far from camp in a busy area on the side of a hill. Digging belt fragments out of the clutch housing on the side of a hill while trying not to get hit by other riders sucks.

Breaking belts is also expensive. At this point the RZR is breaking belts almost every trip to the dunes. If we can use the Razorback gauge to save two belts it will have paid for its self.

Razorback recommends keeping the belt temperature under 200°F – 225°F to get the most life out if it.

Installing everything is pretty straight forward. The most time consuming part is running the cable from the clutch cover up to the front and into the dash of the RZR.

2. Install the temperature sensor into the clutch cover

After removing the cover find a location to drill the 1/2″ hole for the sensor. The sensor needs to be perpendicular to the belt. It should not be facing up since dust could settle on it and interfere with the temperature readings.

Razorback recommends placing the sensor at the 3-4 o’clock position near the secondary clutch on the RZR. This allows the sensor to be installed in the plastic cover instead of the metal clutch housing.

After drilling the hole, insert the sensor, apply Loctite to the threads and tighten the lock nuts.

4. Run the sensor cable to the front of the RZR

Once the clutch cover is back on its time to route the sensor cable to the front of the vehicle so we can mount the gauge. We ran ours through the firewall and between the seats under the plastic cover the seat belts go through. This will protect the cable from the elements and abrasions.

To do this remove the firewall access panel, seats and the center console piece so the cable can be fed underneath.

After the cable is run to the front of the RZR it’s then run to the hood so the power wire can be connected and the sensor wire can be fed to the dash where the gauge will be mounted.

We ran our cable through the center console through the front firewall to the wiring harness area under the hood scoop. From there we ran it behind the dash through a grommet hole behind the spot the gauge would be mounted.

A hole saw was used to cut into the dash for the gage.

Next, using a test light we found a 12V power source and connected the power wire. The sensor cable was then connected to gauge.

After the power wire was connected and the sensor wire attached we put everything back together and tested it out. The gauge worked great, it was bright and easy to read in the afternoon sun.

The real test happened once we got the RZR back in the dunes and figured out what kind of driving it takes to reach the various temperature levels. We took the RZR out to Sand Mountain, NV and rode around for a weekend while testing out temp gauge.

Pulling hills at high speeds made the belt heat go way up. Interestingly, a great way to cool the belt down was to put the machine in park and rev to about 4,000 rpm for a short period of time. This cooled the belt enough to prevent breakage and allowed us to keep riding all weekend.

I have no doubt we will get more life out of our belts since we can back off the throttle before permanent heat damage occurs. The gauge also gives us an idea of the kind of riding that cools the belt down since stopping and idling didn’t do much to drop the temperature.

The Razorback belt temperature gauge is the perfect addition to any UTV or Side-by-Side with an overheating CVT belt. By keeping an eye on belt temperature you can adjust your riding style to prolong its life. The gauge can also be used to diagnose potential problems with the CVT transmission creating excessive belt heat.

In 2004, Yamaha changed the rules for the side-by-side market with the introduction of their Rhino 450 and 660 model… 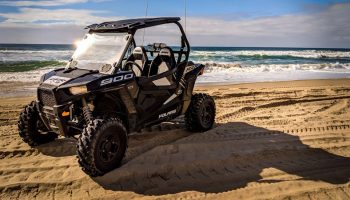 So, you have a UTV, and you are looking into purchasing vinyl wrap for your vehicle. The problem is, there…

UTV events and expos provide a unique platform for businesses to increase their brand success through meaningful interactions and engagement….